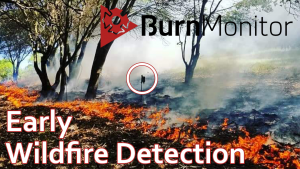 In early 2020 several diverse technology companies joined with the Moraga Orinda Fire District, UC Berkeley and Inria to test end-to-end wildfire detection, alerting, and evacuation tools. The goal of the pilot was to alert public safety officials of a wildfire as it starts, reducing response time and allowing first responders to take action on the fire before it becomes uncontrollable. Rapid response and effective initial attack greatly reduce the chance of a fire becoming a conflagration. The pilot brought together the BurnMonitor system which combines a secure, efficient mesh network of wireless sensors on the ground from Analog Devices with near-real-time satellite imagery from Planet Labs and a powerful back-end. Zonehaven provided firefighters with fire tracking tools and fire propagation models to combat the fire, make multi-agency notifications and coordinate evacuations while providing a common operating picture. This video shows the system operating start to finish during an actual prescribed fire project in Orinda, California.

You can find out more about which cookies we are using or switch them off in settings.

This website uses cookies so that we can provide you with the best user experience possible. Cookie information is stored in your browser and performs functions such as recognising you when you return to our website and helping our team to understand which sections of the website you find most interesting and useful.

Strictly Necessary Cookie should be enabled at all times so that we can save your preferences for cookie settings.

If you disable this cookie, we will not be able to save your preferences. This means that every time you visit this website you will need to enable or disable cookies again.